I have the first draft of this up to the internal group now.  the client lets you login, or create an account if you don't have one yet.  At present, everything is on instant validation (no email validation required).  Since everything you see in the game is supposed to be loaded by the data for each user, I wanted a way to at least create and manage separate test accounts.  Then, once you are logged in, it takes you to a different scene, just showing a warehouse and a truck.

Unless something truly heinous is noticed in the log in/registration screens on the game, I'm going to ignore them for a while and just focus on the actual game play.

When connected, this is your screen: 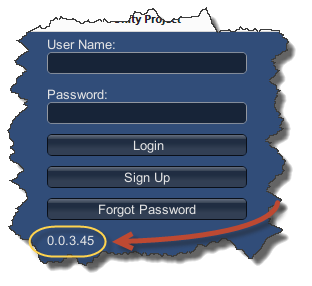 To anyone engaged in the project, I wanted to point out that the version in the corner is actually the server version, not the client version.  I will at least make the text clear on this in the next developer build, listing both client and server version.

At present, Forgot Password does nothing.  Technically, it changes the Username to "Forgot" to show that the button does something, but I'm not concerned with it at the moment.

Passwords come across as '*''s and are encrypted to an MD5 hash, so they can not be reasonably reverse engineered.  This is handled on the client before being sent across the network.  The server will have no idea what the original password was, and the code in the client is set to forget it as soon as you are done logging in.

Once you do login, you are given a session code, which is managed by the server, and has a timeout of 20 minutes.  That presently has no effect, because when you log in, there is nothing you can do yet.  It just takes you to a simple view to emphasize that you have actually logged in:

I would point out, that my knowledge of producing 3D objects is limited to what you see here.  I used Blender, and in blender, I had the two objects skinned/textured, but I was unable to get it to save in a format that Unity is able to use.  I welcome help here.  I will add/user basic objects of my creation as filler for the time being, but will need someone else with good 3D skills to provide real work.  Of course art concepts are still in progress.
Posted by Dan Violet Sagmiller at 8:11 AM No comments:

Why make this RTS?

As much as I like Star Craft, I find that to get particularly good at it, that you need a HUGE amount of practice, memorization of expansive strategies, and a click ratio of more than once per second.  It's more a game of high speed reaction.  Strategy should involve thinking, but the good players aren't thinking in Star Craft as much as following scripts and improving their speed.  I wanted to create a way to reduce the multitasking and give people time to think and plan.

I started with the idea of an RTS, but instead of relying on my instinct alone, I took to GameDev.net, an excellent forum of developers, game designers and creative minds, and asked some open ended questions about RTS games today.  After pages of discussions with dozens of other minds, I came to the conclusion to split the modern RTS into 3 games; a city builder, a tactics game and a strategy game.  Each game is separate, but they are interconnected and benefit each other.

The city builder will be on a protected planet, with no threat of attack.  As you build up your technologies, you will eventually get to create troops and vehicles to 'warp' into battles on other planets.  As this game is the City Builder, you don't actually get to see the battles, just knowledge that your troops have gone off to war.  This game will provide several upgrades over standard city builders.

The Tactics game takes the troops when they are transported into war.  Its not just some simple skirmish, but part of a larger scale war, with hundreds of other squads in battle, some with less skill, some with more.  While the game will try to place you in balanced combat, it is entirely possibly for opposing squads to converge on your area, becoming a 5 to 1 fight or vice versa.  You will be given a mission goal and typically 5 to 10 minutes to carry it out before getting warped out.  If you are unsuccessful, then you don't earn much.  but the better you do, the more reward you take back.  Some rewards include technology upgrades.  If you play this game alone, these upgrades/rewards allow you to start going into battle with better squads.  If you play the City builder as well, these technology upgrades go to your city, which lead to training better troops and building better technologies.  This game provides a few interesting things.

The Strategy game is more like being a general in an army.  you can see the battle field.  You have resources available to you, and will work to control a planet with other generals/commanders.  The planet will be divided into regions.  Once all the regions are owned by your side, the planet can be fully protected from unwanted warping, and essentially war.  You can see all the skirmishes happening, but will typically look at a larger view of the entire planet, or at least the region you are in direct control over.  As you see things happening, you can click on the map and establish an interest, such as building a bridge, taking out defenses, fortifying a building, etc. and pay to warp in a squad to take care of that. Earning credit takes time, so often you will use numbers of weaker squads, but if you hold off, you can choose to bring in larger, more powerful squads.

Whats really nice, is that you can choose to play just one at a time, and have that be all, or you can play combinations, even all three, and have your accounts from each set work together.  By working together, you can guarantee better setup between games, and have the bonuses from each cross over to your accounts in specific.  (I.e. no loss to the middle man)  You can also form teams with others, where you might be the best city builder, but someone else is the best tactics, so you work together, boosting each other through.

Wanting to make an RTS with Unity 3D

Of course, I've wanted to make an RTS for a long time.  It seems like splitting the game into 3 separate games, will be far easier to manage, as it is not one game that needs to manage all three aspects of the game play, but 3 separate games that can be built one at a time.  Of course by starting with a City Builder, which I believe will be the easiest, I believe that will give a great place to learn unity on top of this.  I've used numerous other game engines and built my own smaller ones.  But I've been wanting to use Unity since it already works on most devices/OS's.

I'm hoping that the creation of the City Builder will help to fund the next 2 games, as well as pay for its own service costs.  Servers don't grow on trees you know!  (We have to place them in trees our selves)

Anyway, this is going to be a long journey, and I hope it will have many playable updates along the way.  I hope many others will enjoy this game as much as I hope to.  :)
Posted by Dan Violet Sagmiller at 7:10 AM No comments: