Its been a while since I last posted (5 days to be exact) and I didn't want you to think that I've done nothing. Why I've spent a great deal of time thinking about nonsense, like Alderon and the 7 Dwarves (they both had buns on their heads)

But in a not to distant actual reality, I found myself dealing with an annoying bug in the latest update of Unity (4.1) where all my JS files now complain that they don't have a UnityEditor using statement.   But I just go that fixed.  I also spent a while thinking about the best formats to save the data to, came up with a really good one, but then went with the easier one for now.

I also established build environment configurations for the client and service.  This allows me to build for the different environments faster, as I don't have to change a whole bunch of settings for each environment.  This is important as the number of changing features have increased.

So now, at user generation, it creates a map file, stores it on the web site, and the client downloads it.  Then, it shows how large the map segment was in bytes: 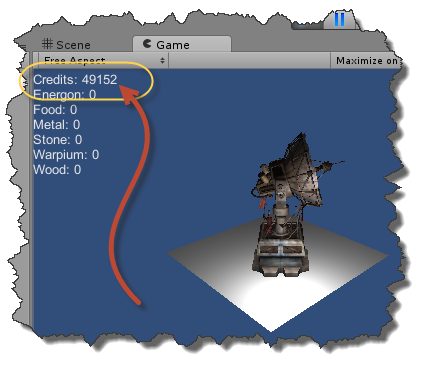 Since this single number position value is the only thing that changes, and its only in this image (not uploaded), you might be thinking that all I really did over the last 5 days was accidentally break the resource dynamics so that only the Credits would work.  You'll just have to take my word that something cooler is happening behind the scenes.  :)