(No new demo online yet)
I've been working on the map system some more.  I went back to a random map, relying on code that I knew worked, but was at the wrong angle/position.  After messing around with that for a bit, I finally got the ground showing up at on the X/Z plane, with +Y=Up.  I built the code that produced all the vertices and UV mapping (textures) for every triangle of the ground (ideally every square) from scratch.  And with this, had to realign/position everything.

I don't know why it seemed reasonable to me to use X/Y as the ground plane originally.  if I went with that, I'd have to rotate every object that entered the game, and external scripts wouldn't work in many cases.  The rotating camera motion is from an asset called Mouse Orbit.  it keeps a certain distance, from the target object, but its only lockable angle is from the Y Axis.  (so you can prevent it from looking on the other side of the models)  I would have had to rewrite the code for that as well.  I think I've been in the 2D X/Y side for too long lately.  So anyway, here is a screen shot from the new code. 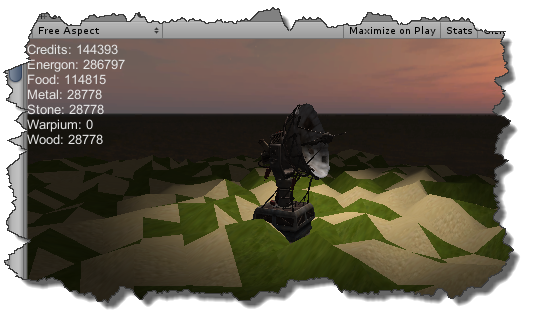 Oh yeah, I also added a sky box.  Its a bit more fitting now with actual sky, instead of that faded dark blue.  The opening login is still the same space scene.  (Oh look, it spins.)

Posted by Dan Violet Sagmiller at 3:53 AM