I'd like to take a moment to introduce one of the new members of the team: Pavel Marar.  He's worked on a few NDA restricted game projects, so unfortunately, I can't share much about his background.  But he's already been helping out and by far the most interactive member on the GDD, Building Discussions and the future of the Tech Tree. 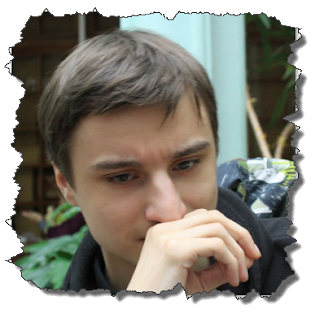 He's located in Moscow (Russia, in case there is any ambiguity) and is what I would consider a Bohemian in pursuit of riches.  :P  He gets only 3 hours of sleep a night, usually waking up with a keyboard imprint on his forehead.  (I may be winging this description a bit)  He works part time, so he can eat, but the rest of the time he's designing games.  His goal, is to get some great games built with his name on the credits, and hopefully, some cash in his pocket.  Bohemian yes, but you are more free to make games when you don't need a day job.

What to call him?  Pavel, or else his computer's call him "effes".  I did a translation on that, and it comes out as "effes".  So what does it mean?  A while back, he choose a character name in HoMM 3, by hitting the keyboard with no particular word in mind.  Ever since, his computers have known what to call him.

What's he working on now?  He's been working on math models for balancing city structures/tech trees, and also taking an advanced look at the next 2 games, WW Tactics and WW Strategy to start the ground work their as well.